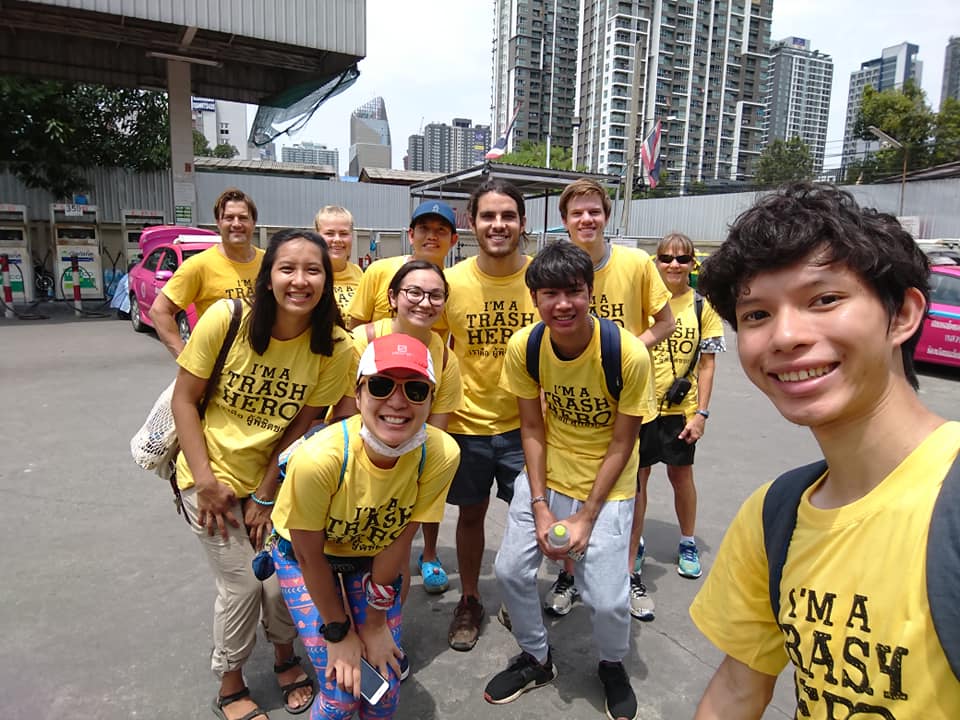 Tristine Lam, 21-year-old student from Plano, Texas, became a hero in her own right when she walked the streets of Bangkok with a trash bin in tow to rid the environment of plastic waste and raise awareness of excessive plastic consumption and improper garbage disposal. She even rallied support from other like-minded heroes.

One sunny day in Bangkok, a group of 12 people showed up on Rama IX Road to collect about 15 bags of trash, which included a lot of plastic and single-use takeaway bags and containers, straws, ink cartridges, snack packaging, glass bottles and other waste. The eclectic band of strong-willed volunteers was made up of three University of Texas student interns, seven locals, Trash Hero’s coordinator, a Norwegian father and his daughter and the mastermind, Tristine Lam.

“The project may seem to have been a temporary solution,” Tristine said, “Our hope was to encourage the volunteers to change their habits and ditch single-use plastic. My favorite part of the clean-up was the discussion we had just before we started picking up trash. I encouraged everyone around the circle to talk about one way you are “saying no to plastic” or doing something about the problem. It was awesome seeing some locals truly do care, but it’s just a huge problem to tackle. I’m hoping this will create a domino effect and inspire those who volunteered and those who expressed interest in the event.”

Aspiring to become a professional physical therapist, Tristine’s other passion is to strive towards a zero-waste lifestyle. Growing up in a family where zero-waste conduct was encouraged and imposed since very young age, not only she is conscious of the amount of waste she’s producing, Tristine also constantly looks for ways to help. It was not until her internship with medical tourism company, Medical Departures, in Bangkok, organized by NEXSTEP earlier this year that her life-long passion and mission propelled into a fruitful collaborative effort.

“I had studied in Bangkok in the fall on 2017, and even then I became aware of the amount of plastic used, not only in Thailand but also in most of Southeast Asia,” Tristine said. “When I had the opportunity to return to Thailand to do the internship, I felt responsible to do something to not only clean-up trash, but also to inspire others to reduce their plastic usage in a city where it is seemingly impossible. I was further inspired to follow through with my idea of hosting a clean-up during a NEXSTEP professional networking event, in which Frederic Pouget, a lecturer at the Dusit Thani College, incited a discussion about the ridiculous trash problem in Thailand during his presentation.

“I used Facebook to reach out to a couple of businesses that focus on sustainability in Bangkok, like Zero Waste Thailand and Refill Station. They both told me to reach out to Trash Hero Bangkok, an organization that aims to clean-up the city and implement long-term behavior change. Luckily, I met with the Trash Hero BKK coordinator, Albert Font De Rubinat, who was a great resource, and helped me share the event information to the Trash Hero Facebook page, as well as provided awesome T-shirts and gloves for the volunteers. It all worked out in the end. I would also like to thank NEXSTEP, especially Jason Grant and Jerome Le Carrou, for the encouragement and support to organize this event.”

The event was a success and an eye-opening experience for Tristine. “I learned about organizations like Scholars of Sustenance, which focuses on reducing food waste from five-star hotels and redistributing it to those in need. I learned about Precious Plastic, a global open source project that shows you step by step how to build small-scale recycling machines to shred and melt plastic then create valuable products out of plastic waste. Most importantly, I will try my best to let my actions reflect what I believe in, rather than just rambling about it. The entire process of the Bangkok clean-up fulfilled me, without a doubt, but I don’t want it to end there, I am definitely not done.”

Now back in Texas to pursue her education, Tristine took with her from Bangkok the determination and experience to soldier on with her good cause.

“The Precious Plastic project is my next endeavor,” she said. “I want to implement Precious Plastic in Austin, Texas with my friend. He happens to be a sustainable engineer intern at KFC, so this project is right up his alley. We have already started discussing funding and a potential workspace for the building of the machines, and we are so excited to see the project come to fruition. We’ve already started the discussion with a couple of University of Texas organizations such as Texas Sustainability. We hope to establish Precious Plastic as an on-campus university organization, so we can involve other students in this project.

“What is so great about this project is that, once the machines are built and functional, they are open to anyone in the community to come and recycle their plastic waste and to create products out of it, which they can then sell or use. In other words, there is a business opportunity that comes with this project as well. The incentive might give people who may not previously have a reason to recycle, to recycle now! I am hoping for big things in these upcoming months.

“It isn’t enough to wait for the government to implement policy changes to manage the waste and control the plastic pollution. Let’s inspire our neighbors, encourage our friends and educate the youth, tell them that change starts from our individual actions. Sometimes, it may seem like you’re not making a difference because you’re just “one person”, but all the little changes add up. Dalai Lama has this quote, ‘If you think you’re too small to make a difference, try sleeping with a mosquito’. Lead by example and others will be inspired, then they will follow suit.”

Next Step Conversations: Future Leaders – Episode 15 – Avni Patel – What Do I Do With My Life?

A NEXSTEP Insight A tool that, surprisingly, I’ve never been taught at school or University…